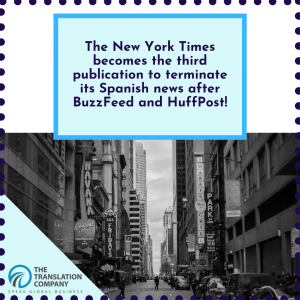 The Repercussions of Incorrect Grammar on Social Media

Imagine being an influencer on social media. Imagine having the ability to sway opinions and having millions looking up to you. Many would argue that this is a great responsibility. However, do influencers also have a responsibility to be grammatically correct when posting on social media? Should they have impeccable vocabulary? While the general public may not be paying keen attention, there is a certain amount of policing that keeps an influencer’s grammar in check. The anonymous social media account, @englishbusters is notorious in pointing out Indonesian influencers using English incorrectly on their social media posts. However, @englishbusters can be “snarky”and “provocative” in their call-outs which can be embarrassing, especially for an influencer who doesn’t speak English as a first language. While the article focuses primarily on Indonesia, it also claims that there is a need to use English on social media sites by young influencers because they consider English to be “the successful language.” While Academics agree that correct grammar and an excellent vocabulary can make a huge difference in marketing, influencers should also not have to adhere to strict grammatical rules, especially if English isn’t their first language. More attention should be paid to the content of a post. What are your thoughts on social media influencers and accurate grammatical rules in English? Click on the link to read the full article! 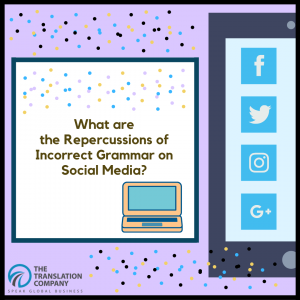 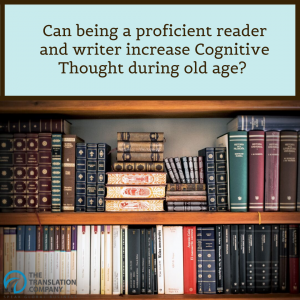 Not Understanding Hurricane Dorian’s Danger Due to Language

It is already a nerve-wracking experience to immigrate to a new country with your family. It is especially daunting to be a student who has traveled all alone to study in a new place. Often students coming to study in North America are used to different customs and have to adjust to a new lifestyle. Many times, language is a barrier also. Recently, international students at Cape Breton University in Sydney, Nova Scotia were unable to comprehend the safety procedures that the University followed in order to be safe from Hurricane Dorian. That was partly because of the language barrier, and partly because safety procedures are followed differently in different countries. International students didn’t understand how severe the storm could be because Canada requires a certain amount of “personal precautions” that citizens need to take, which internationals students haven’t done before. However, there are measures being taken to increase effective communication between the city and its new members, and to help international students gain an understanding of the safety precautions instigated by the University and the Province. Click on the link to read more! 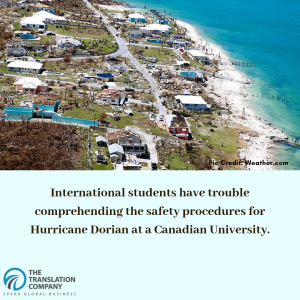 Could Language be the Problem Solver of Fake News?

Have you ever been caught in a whirlwind of news and wondered if what you’re reading is accurate or not? There is a plethora of questionable information available to the consumer and it can be a hassle to swift through factual information versus fake news. However, recent studies show that language may be a determining factor that can filter out incorrect information or forgery. Fake News on the internet has a certain language pattern that it uses continually and is often emotional in tone. For example, there may be an excessive use of the second person pronoun “you” or the superlatives “most “or “really.” In order to validate this hypothesis, experts analyzed articles by Jayson Blair, who was found to be plagiarizing at the New York Times in 2003. Even though there isn’t a clear answer to entirely eradicate false information from the internet, experts believe that language can help immensely. Click on the link below to read the complete article by David Shariatmadari to learn how you can recognize patterns in language that can help you filter out the fake news to what is factual and true.

Air Canada has been ordered to pay $21,000 due to dispute with French Couple

Recently Air Canada was sued by a French couple for language violations. They claimed that Air Canada was biased towards English and anglophones when compared to French speakers. Their main concerns were the signage used by the airlines that had words in English “in larger font than the French ones.” As a result, Air Canada has been ordered to pay $21,000 to the couple and provide them with a written apology. The couple hopes that this case will result in Air Canada giving equal importance to both languages for their signs in the future.

Posted on: 03/27/2018 by The Translation Company Administrator

Customs vary from country to country and foreign visitors are often left perplexed by the cultural differences. It’s easy to assume that because we celebrate certain traditions, everyone else does too. Whether these are annual holiday routines or country-specific cultural habits, every family has a few strange practices they’re used to.

Just look at tea. It’s seen as a stereotypically renowned British pastime, typically presented in ornate chinaware with a saucer. Cross the English Channel over to France, however, and the British would have a heart attack after seeing the French habit of drinking tea from a bowl.

Our infographic explores the way customs and traditions differ from country to country.

Use the following embed code to add this infographic to your website:

Posted on: 03/20/2017 by The Translation Company Administrator

To the outside world, national mottos are often used to describe the intent or motivation of the country in a short phrase, but they’re also intended to bring enthusiasm and a sense of patriotism to the people. National mottos can also have a deep meaning, often representing what a nation stands for or strives for, which is why you can find national mottos included on a country’s coat of arms, coins or banknotes.

Our infographic explores a number of countries and their choice of national mottos translated, from the Roman Empire’s ‘’Roma Invicta’’ meaning ‘’Unconquered Rome’’, to Moldova’s ‘’Limba Noastră-i o Comoară’’ meaning ‘’Our Language is Our Treasure”.

Use the following embed code to add this infographic to your website:

Posted on: 03/13/2015 by The Translation Company Administrator

The best books have the power to touch people on every corner of the earth, not just the country they're written in, allowing readers to expand their horizons and discover new cultures and different ways of thinking. But if these books are to be enjoyed all around the world they need to be translated into different languages first.

To celebrate World Book Day we've created an infographic that takes a look at 50 of the world's most translated books, from The Alchemist (first published in Portuguese) to Wolf Totem (Mandarin). We hope that the list will inspire you to open your mind and find a book that speaks to you, whatever your mother tongue!

For a full list of the sources used to create this infographic please take a look at this Google Doc.

Posted on: 02/20/2015 by The Translation Company Administrator