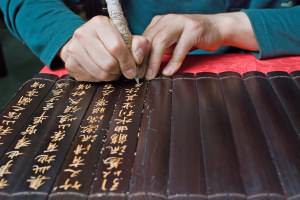 Pop “Chinese tattoos” into Google, and you’ll find results riddled with disastrous tattoos. That beautiful symbol that was supposed to mean “peace and happiness?” Well, turns out, it actually just means “wet dog.” Just last year, a tattoo artist from Sao Paulo, Brazil, was arrested for allegedly tattooing an unsuspecting client with a tattoo in Chinese characters that read “chicken noodle soup,” and not the beautiful quote from Antoine de Saint-Exupery’s “The Little Prince” that the client had requested.

All Too Common Mistakes

When Westerns seeking a Chinese tattoos pop the desired phrase into an online translator and tattoo the results on their body, it is an absolute recipe for disaster. These automated translators can’t always appropriately contextualize the word. “A common mistake is the word for freedom,” the Shangaiist reports. “People get the two characters inked onto a lower back. (kòngxián) means ‘free,’ it’s the ‘free’ that means you’re not busy, as in ‘you’re available to hang out for lunch.’ People likely intended to get ‘free’ as in ‘freedom,’ which would be (zìyóu).

Even in a case where a client brings in the correct character, if the tattoo artist doesn’t have a grasp of the Chinese language, it is a risky proposition. “If the artist goofs up a single stroke, it can entirely change the meaning of a character. For example, these characters all differ from one another just by a single stroke, but each yield different meanings” the Shangaiist explains. “To a tattoo artist who has never studied Chinese, the differences are difficult to see and seemingly insignificant.” Yet to any Chinese speaker, the difference is likely dramatic. The bottom line: even the minutest stroke makes a huge difference.

What Is the Key to a Great Chinese Character Tattoo?

Can you get an excellent Chinese-language tattoo even if you don’t speak Chinese? The answer to this question is a resounding yes. However, there is a caveat: You need to do your research. Find a tattoo artist who knows Chinese characters and make sure the character you are about to permanently tattoo to your body actually means what you think it means.

Luckily, there is a new app out on the market that can seriously mitigate the risk of tattoo translation blunders and avoid a comedy of errors all over your body. Known as Waygo, the app boasts a simple point and click feature that allows you to take a picture of a Chinese character and instantly receive the translation services. The app even works offline. So consult the app before you head into the tattoo parlor. And if you can’t find the meaning of a specific character in the app’s dictionary, you can easily post it to one of Waygo’s community pages for a bit of help. An added bonus? The app isn’t only handy when it comes to tattoos. It can also be used to translate food menus, street signs, and billboards.