Translation on a Global Scale 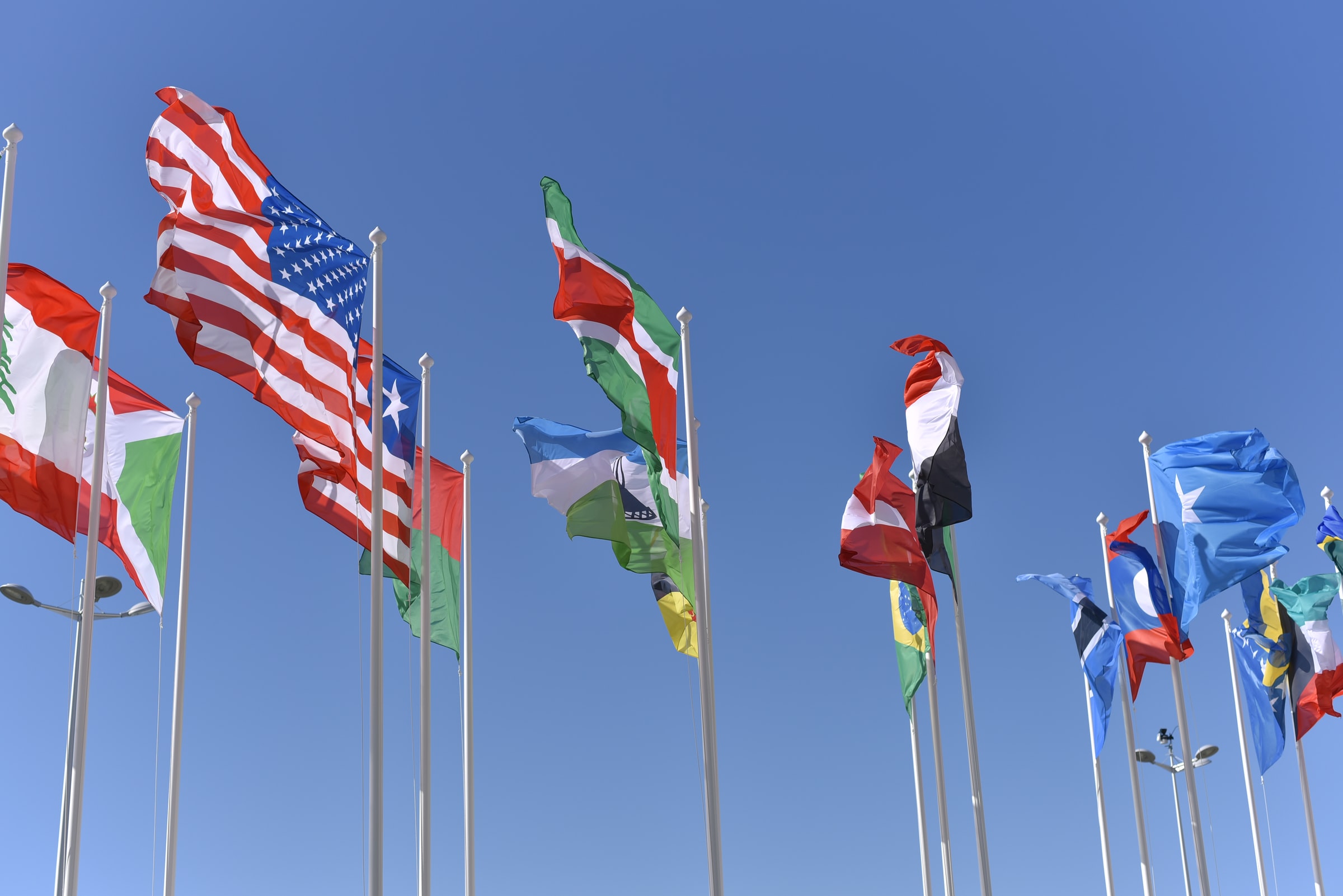 Translation on a Global Scale

UK Prime Minister Boris Johnson brought the world’s leading democracies together to reach major new agreements to help the world fight, and then build back better from coronavirus and create a greener, more prosperous future.

Often when we think of translation we equate it to documents, movies, lyrics, signs, and things we use in our everyday life. However, translation skills have a much bigger role when we look at them on a global scale, for example at the United Nations or events such as the G7 Summit.

Meetings that facilitate international co-operation and look to the future on a global scale have effects across the world. They develop policies and agreements that will be used over and over and that have direct consequences on social, political, environmental, and economic factors worldwide.

There are six official languages of the UN. These are:

The absolute precision of interpretation and translation of these six languages, in both spoken and written form, is very important to the work of the Organization, because this enables clear and concise communication on issues of global importance.

A delegate to the UN may choose to speak in any of the official UN languages. This is then interpreted simultaneously into the other five official languages of the UN.

On some occasions, a delegate may choose to make a statement using non-official language but this must be with prior approval. In such cases, they have to provide either an interpretation or a written text of the statement in one of the six official languages. This can then be translated into the other five.

Official UN documents are issued in all six languages, requiring perfect translation from the original document.

Multilingualism and the UN

Multilingualism opens the door of conversation and enables the communication between the UN's linguistically and culturally diverse different Member States within the meeting rooms, conferences, and halls of the UN.

By promoting multilingualism, it has bred a culture of tolerance and cooperation within the United Nations which is something the organization is extremely proud of. Multilingualism also ensures increased participation between all of Member States in the Organization’s work, having much greater effectiveness, better outcomes, and more involvement.

The seven G7 countries are:

The most recent led by The UK in Cornwall, South England. In previous years the G7 has taken action to:

From 11th to 13th June 2021, the Prime Minister of the United Kingdom, Boris Johnson, used the first in-person G7 Summit in nearly two years to ask leaders to seize the opportunity. To unite together and to fight and build back better from coronavirus, making the future fairer, greener, and more prosperous across the world.

Language Within the G7

Consisting of seven of the world’s major economies the languages of the G7 countries carry a huge amount of influence socially economically both in global business and politics. According to statistics from the United Nations, the countries of G7 alone account for more than 46% of global gross domestic product (GDP) and represent approximately 58% of global net wealth.

Through professional translations of just these five languages:

A global company or organization can theoretically possess the linguistic skills necessary to expand into over 100 countries, spread across all seven continents with translation services in just 5 languages.

That opens up a world of possibilities.

We cannot talk about international entities that cross the borders of nations and languages without a look at the European Union. The European Union EU was not always as big as it is today. When European countries first started to cooperate economically in 1951, only Belgium, Germany, France, Italy, Luxembourg, and the Netherlands participated.

The Achievements of the EU

The euro (€) is the official currency of 19 out of 27 EU countries. These countries are collectively known as the Eurozone. The Euro has streamlined the movement of money and increased international trade between EU states.

The Schengen Area is one of the greatest achievements of the EU. It is an area without internal borders, an area within which citizens, many non-EU nationals, business people, and tourists can freely circulate without being subjected to border checks. (Source: Europa)

Languages of the European Union

There are 24 EU official languages. Supporting communications in so many languages means that citizens can access and better understand the EU laws that affect them. Citizens can interact with the EU institutions by, for example, submitting petitions or requesting information in any of the official languages.

The European Commission conducts its internal business in three ‘procedural' languages which are English, French, and German.

The European Commission employs around 3000 staff translators and interpreters. With 24 official languages, there are a huge 552 possible language combinations. To cope with this challenge, the Parliament sometimes uses a system of "relay" languages: a speaker or a text is first interpreted or translated into one procedural language and then into others. (Source: European Parliament)

The G20 is the international forum that brings together the world’s major economies. Its members account for more than 80% of world GDP, 75% of global trade, and 60% of the population of the planet. The forum has met every year since 1999 and includes, since 2008, a yearly Summit, with the participation of the respective Heads of State and Government. (Source G20)

The G20 members are:

The G20 Leaders have met every year since 2010. The 2022 G20 Bali summit is the upcoming 17th meeting, scheduled to take place in Bali, Indonesia.

Languages in the G20

The G20 summit offer translation between 15 different languages which is no small feat. With previous summits employing hundreds of translators and interpreters. China went a step further to offer a 24/7 hotline that users could call for free to translate any information from Chinese to one of the 14 other designated languages to ensure visitors could enjoy their visit to Hangzhou to the fullest.

There is no update as to how the translation services will work in the Rome Summit 2021 but we do not doubt that they too will offer extensive services for the member states. The agenda will focus on three broad pillars of action: People, Planet, Prosperity.

The work of all the members throughout the year will be highlighted and discussed during the Summit on the 30th and 31st October in Rome, with Corona Virus taking the lead on topics to discuss.

Within the three different pillars of the 2021 G20 Summit, the forum will aim to take the lead in ensuring a swift and effective international response to the COVID-19 pandemic. They want to be able to provide worldwide access to diagnostics, therapeutic services, and vaccines. This will be working in conjuncture with building up resilience to future health related outbreaks and look to create a stabilized response to international outbreaks in the future.

Under the Italian presidency of the G20 they feel that in an increasingly interconnected world, multilateralism is far more than an abstract concept.

Multilateralism is the process of organizing relations between groups of three or more states.

Beyond that basic quantitative aspect, multilateralism is generally considered to comprise certain qualitative elements or principles that shape the character of the arrangement or institution. Those principles are an indivisibility of interests among participants, a commitment to diffuse reciprocity, and a system of dispute settlement intended to enforce a particular mode of behavior. (Source: Britannica)

"Multilingualism is the basis for multilateralism. Only if we understand each other can we find common ground" – UN Geneva

The size, expense, political and logistical complexity of conferences and international summits raise a host of issues and problems that come with bringing people from across the world.  Their wide range of perspectives is brought together to address social inequities and development challenges, which is a worthy cause but not without issues.

It is an ambitious goal and not surprisingly governments, the U.N., and non-governmental organizations have at times expressed frustration about the processes, procedures, and their outcomes.

However, despite their limitations, summits and world conferences can give delegates an important opportunity to contribute to the ideas of governments and international agencies. This can broaden perspectives and open solutions that may have not been through before.

This is all achieved by Multilingualism. It underpins the entire notion of multilateralism because without it there could be no communication.

It is through language services that these conversations have been nurtured, shared, and encouraged to flourish. Working as a world rather than a nation to deliver solutions for a future bigger than ourselves and our country.

We benefit from translation services every single day. Whether that be tuning into a subtitled Netflix drama, watching a new movie dubbed to our native language, or reading translated documents online.

In a globalized time, borders are becoming less and less of a barrier to the world of arts, science, communication, business, and more. However, as we embrace multilateralism, we face the challenges of multilingualism. When we step onto the world stage it becomes apparent the skill level that is required and the native level of knowledge needed in multiple languages for global summits and organizations to function.

Mistakes in everyday translation can mean the difference in ordering the wrong coffee, mistakes at the European Council convention could mean discrepancies in international laws. Treaties agreed to in the G20 could become invalid for a mistranslated word in a 5000-page document. Meaning millions of dollars would be wasted and would leave people questioning the benefits of such organizations and the cost them to the local population.

The Translation Company delivers quality, care, and understanding in every project offering a range of services that are tailor-made and adapted for a global scale. The Translation Company guarantees 100% satisfaction on all of their projects and has been in the business for over 15 years - they know exactly how to deliver a fantastic service.

With offices in the US in Frisco, New York, Dallas, and San Francisco and internationally in China and Brazil, they cover a range of areas and time zones. Offering translation services in over 200 languages with a huge range of subject matter experts they will be able to assist you in all your translation needs with outstanding quality and service. You can contact them here for more information and a friendly member of their team will be in touch with you to discuss further.