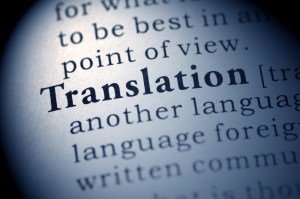 There is a whole science dealing with words and their meaning, and it is quite fascinating when you think about it, as even the simplest language that exists in the world is complex enough to support all the frequent actions, feelings, and can be used as a great source for explaining thoughts and ideas.

When you look at words, they are nothing more than the combination of a few dozens of letters, and speech is made up only from the sounds a human body can produce, but also all the non-verbal cues that we can give.

But, despite being an almost flawless tool that is unique to us, humans, did it ever happen to you that you wanted to explain something but you lacked the proper word? Was it because you forgot it, or the word simply does not exist in your native language? This is quite a common thing, as we have already talked about untranslatable words before, and translation studies is a whole academic discipline that deals with this.

Translation studies deal with both theory of translation and the practical application of translation, interpreting and localization. It is a discipline that relies heavily on other fields of study such as linguistics, semiotics, semantics, literature and the history of language.

There is even a grammar-translation method which focuses on teaching a foreign language via learning grammatical rules and then applying those rules on translating between sentences of the target and native language. Word-for-word translation is common, and the whole point is to learn a new language by translating back and forth, mostly from Latin. This method went hand in hand with the original translation studies which were focused solely on translating literature as an equivalent, than trying to prioritize the purpose of the original text.

In the second part of the 20th century, with the development of the Internet, translation has gained a new meaning, and its importance steadily grew, as well as the importance of translation that is true to the source increased. This gave birth to new procedures that allowed new ways of translating, especially for words that cannot be simply translated into another language:

Adaptation is a procedure of translation where the translator is totally free to use whatever he or she thinks is best so that the connotation of the original text or language is maintained. This is most commonly used for cultural connotations, and subtle jokes that are only available in the source language. The adaptation is not always accepted as good translation, as it is highly subjective, but it can be recognized as a good adaptation of the source language to the target language.

The common example used here is how detectives from the Belgian comic book The Adventures of Tintin, Dupont and Dupond were translated into foreign languages so that they have names that are not Belgian, but from the targeted language, so in German they became Schultze and Schulze. The original joke of similar names remained, while it was adapted to the target language, and the same is applied to the word “Thanksgiving” which has no meaning in itself, so it is translated usually as “Day of Gratitude”.

Unlike adaptation, word for word translation is maybe the least free translation, where every word has to have an equivalent, without paying attention to the original sense of purpose. It is the most scientific translation, used as a technical translation. The quality of translating this way can be quite poor, as it can be full of errors, as the translator does not have to make any effort to convey the original meaning, joke, or idiom.

This is mostly used by unqualified translators, who do not have a good knowledge of either the source or the target text, and this was the most commonly used method of machine translation until the development of translation software which nowadays uses examples from both source and target language.

The simplest example would be to translate the German word “Kindergarten” as “children garden” in English, while this word is actually referring to the school year before the first grade. The literal translation cannot be used for untranslatable words, and that is why this approach cannot be used at all for words like “Waldeinsamkeit” (German) which stands for  a feeling of solitude and happiness in nature, and not “Woodsolitudeness”

Can a Translation be as Good as the Original?

This all leads to a bigger question: can a document translation be as good as the original document? Saying that those two most important methods we’ve described above are all of them, that would be a huge understatement, as there are numerous other methods that can be used in order to convey meaning between languages. How does all of this deal with untranslatable words? Well, it tries to find the best responding equivalent or phrase in another language without the fear of having to describe the word.

While untranslatable words exist, they are gathering much more attention than they should because the statement itself is wrong; those words do not have a single word as an equivalent in another language, but they can be translated as an idiom, or a phrase.

Look at it this way. A human brain thought of a word so any human with a brain could understand it, despite the fact whether his or her language has the corresponding word to describe it. The translation may be longer and complex, but it is still a translation nonetheless. Some people would say that this is actually defining, and not translating, but even that is good enough, as long as the original meaning and purpose are conveyed, and they are used in the right context.

In the end, language is not afraid of simple borrowing, and I have intentionally saved this method of translation for the end. It consists of actually taking words from another language, as is, maybe changing its spelling so that it corresponds more the way it is pronounced, adjusting to the rules and grammar of the target language.

English has borrowed many of its words from Latin, French and other languages, simply because it had no equivalent. So, many years from now, you can even see an American in New York saying that he misses waldeinsamkeit. Of course, a word is truly borrowed fully as long as it retains the original meaning.

So, while the popular media are fascinated by seemingly untranslatable words, the truth is that, as long as humans are inventing words, humans of all nations and all language users will be able to understand the meaning of it, and the proper description and equivalents will be found, as long as the original aspects are preserved.