Novelty T-shirts are one of the world’s favorite souvenirs. But if you’re visiting somewhere you don’t speak the language and want to buy one of them, you better be careful. Because as the designs below show, mistranslated t-shirts can be hilariously nonsensical.

Here are 12 examples of mistranslated English t-shirts that are sure to get you laughing.

Although you may agree with the sentiment, this one probably isn’t a t-shirt that you’ll want to put on unless you’re around people you know will find it funny. 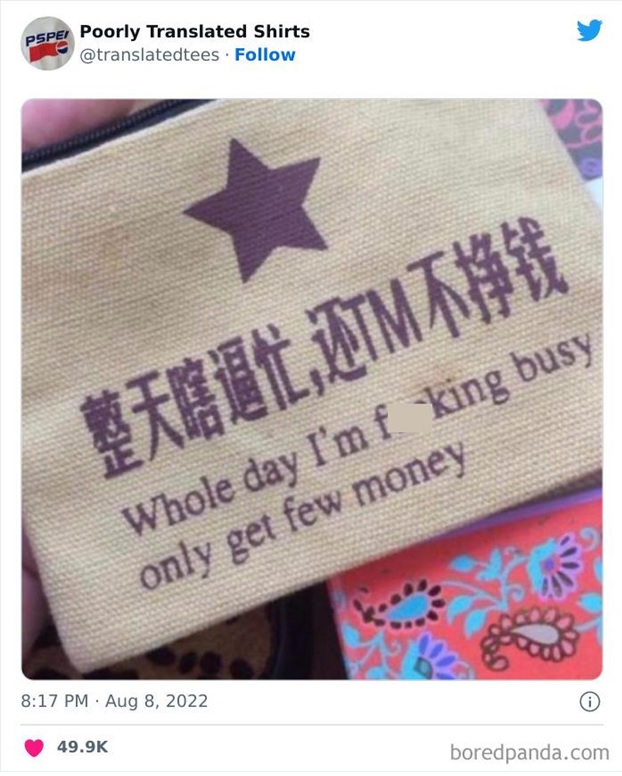 Here’s another strange English mistranslation that made us chuckle. Maybe the poem makes more sense in another language. But if you wore this in an English-speaking country, someone might ask you if you need help. 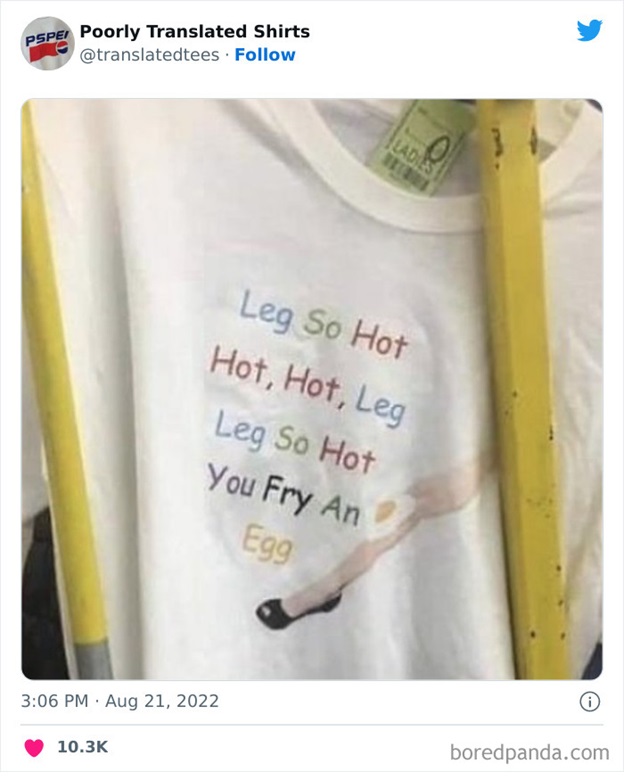 Oof. If you’re going to make a fake t-shirt to appeal to fans of a major TV show, at least make sure you know the name of the show next time. 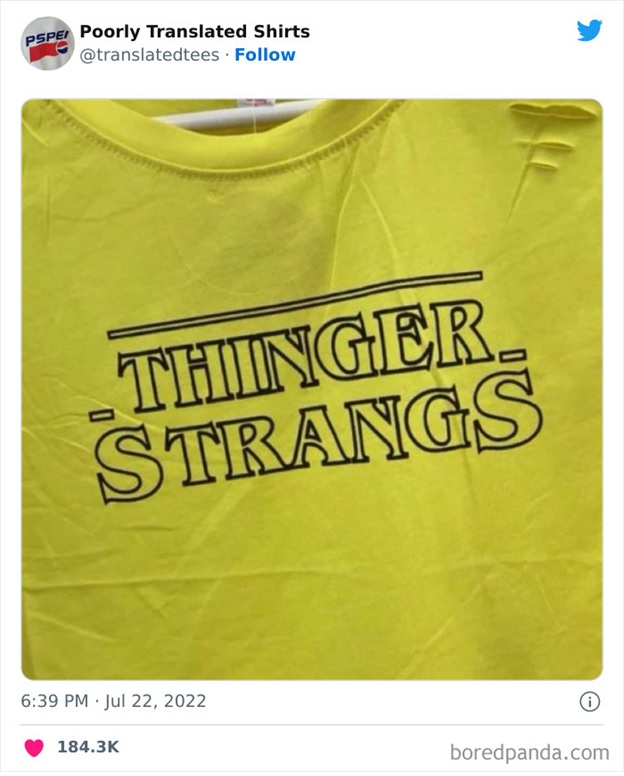 This isn’t exactly the kind of thing you want to wear on a shirt. I mean, sure, all of us have to go someday, and it’s a nice sentiment, but it may be just a touch too dark for an average day in town. 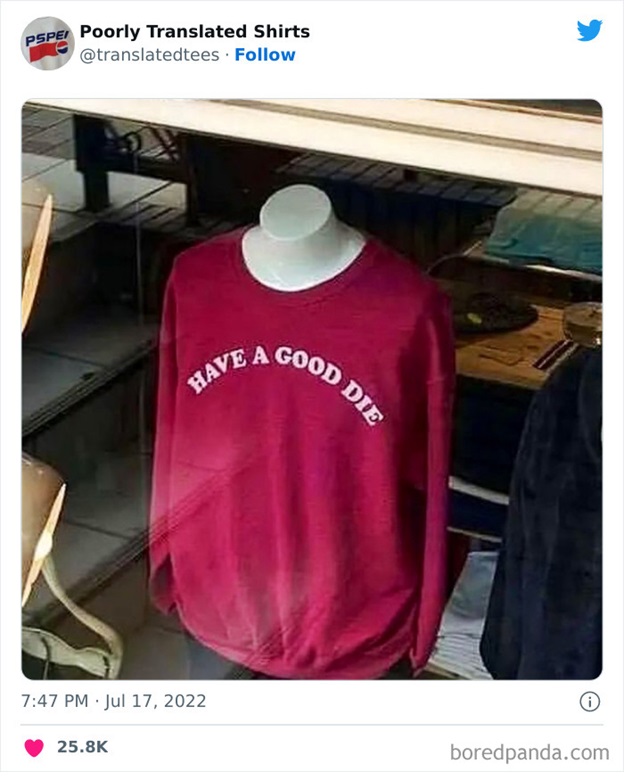 This one actually sort of makes sense if you think about it. He’s a fat guy, and she looks delicious. It may be the strangest possible way to say I love you, and it probably sounds better in its original language. But we can at least understand the sentiment, unlike some of the other shirts on our list. 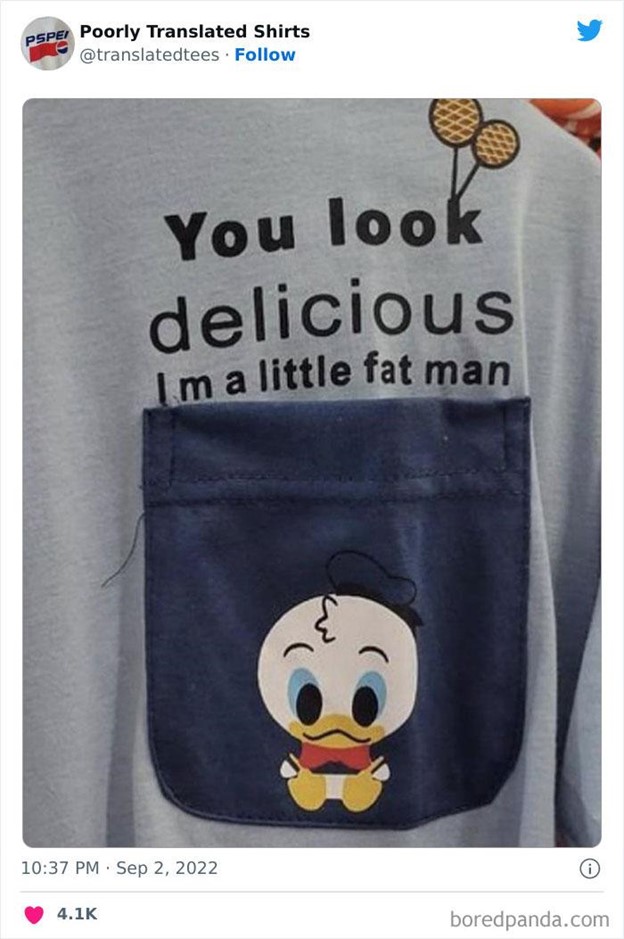 Speaking of shirts that don’t make any sense, here’s a prime example. We’re not even going to try to describe this one. We just wouldn’t be able to do it justice. 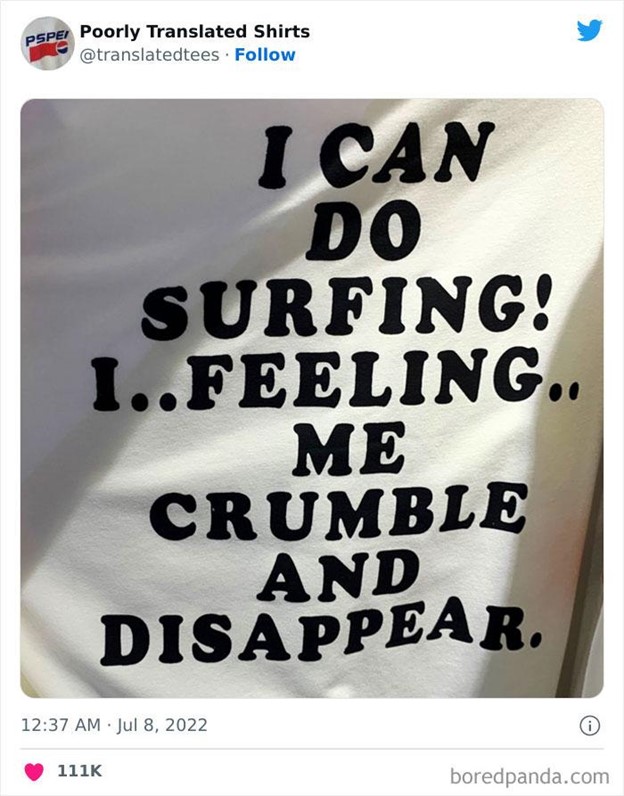 So close, yet so far. You can see where they were going with it, and if it made sense, it would be a profound, thought-provoking statement. But it’s a reminder that close isn’t good enough in the world of translation. 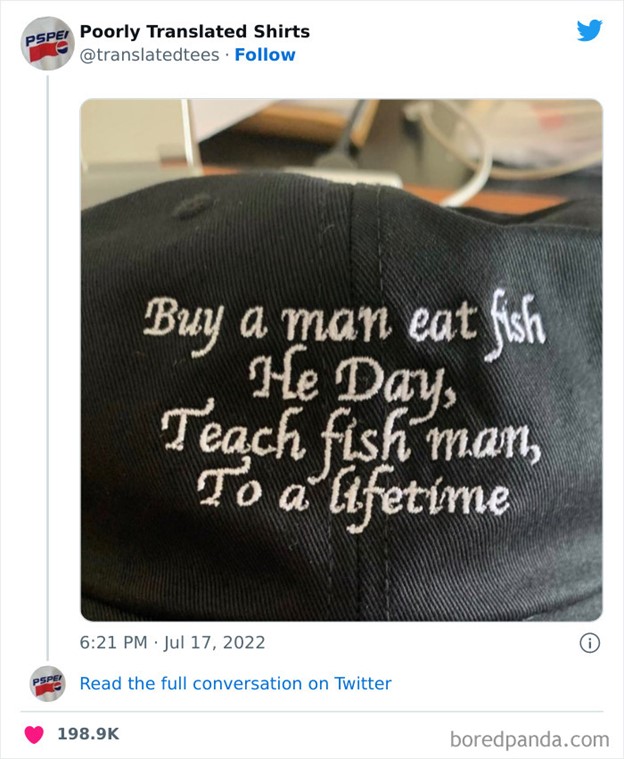 I didn’t Do It

This shirt starts strange and gets stranger. (Talk about Thinger Strangs). What didn’t the wearer do? Why do they want to speak to their grandma about it? And why is the whole thing an ad for San Antonio? I guess we’ll never know. 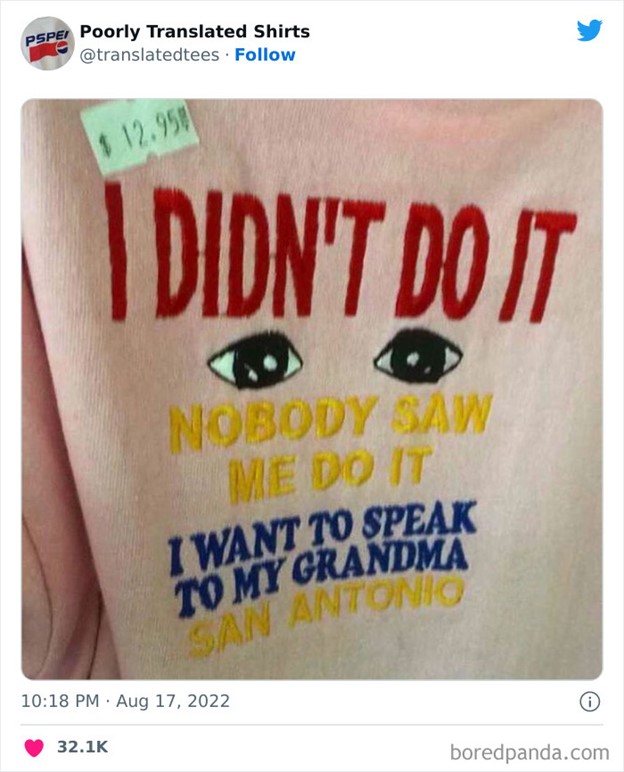 You can feel the pain in this one. They trusted “u”. But no more. That’s something we can all relate to. (Side note: did they not have spell check?). 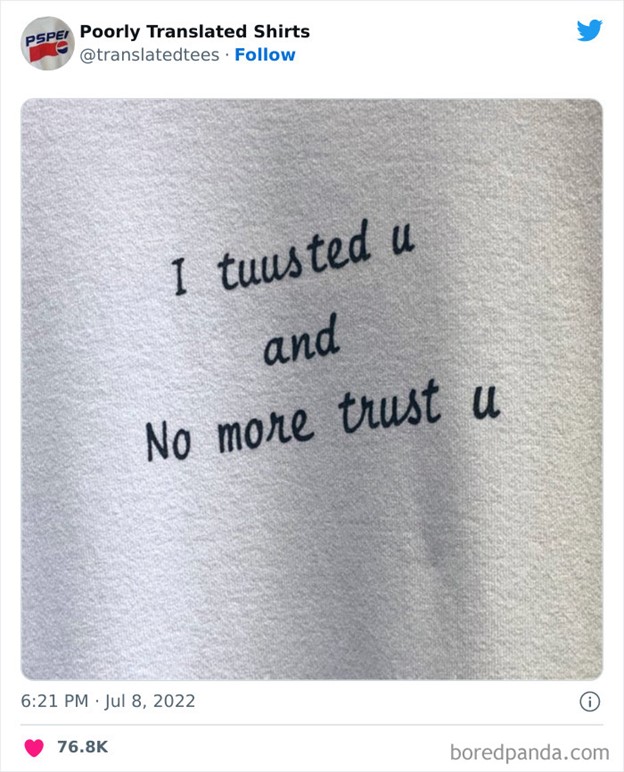 This one is a work of art. From addressing it to “my boss” to asking for confirmation and signing off as “Challenger” there’s a lot going on here. 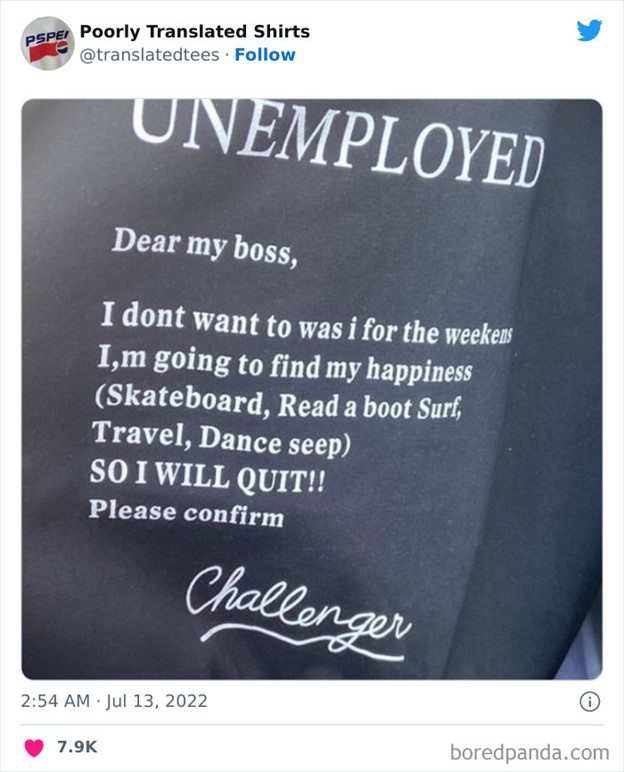 The setup is excellent, but the follow-through is lacking. For the record, we do think you can do it. 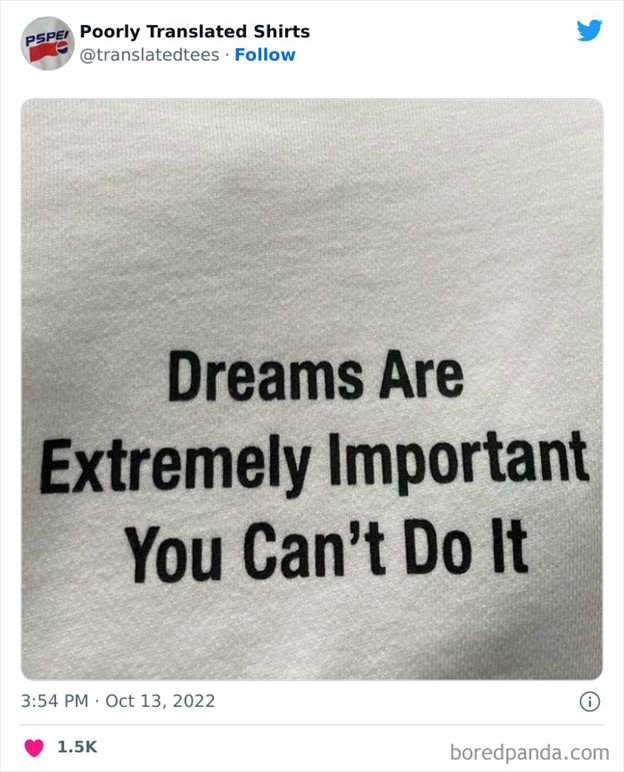 “Where I Went, Tere I was.” It’s factually accurate, at least. And isn’t that the real goal of every novelty T-shirt? Also, we’re not sure why she’s drinking or what it’s in the glass, so just use your imagination. 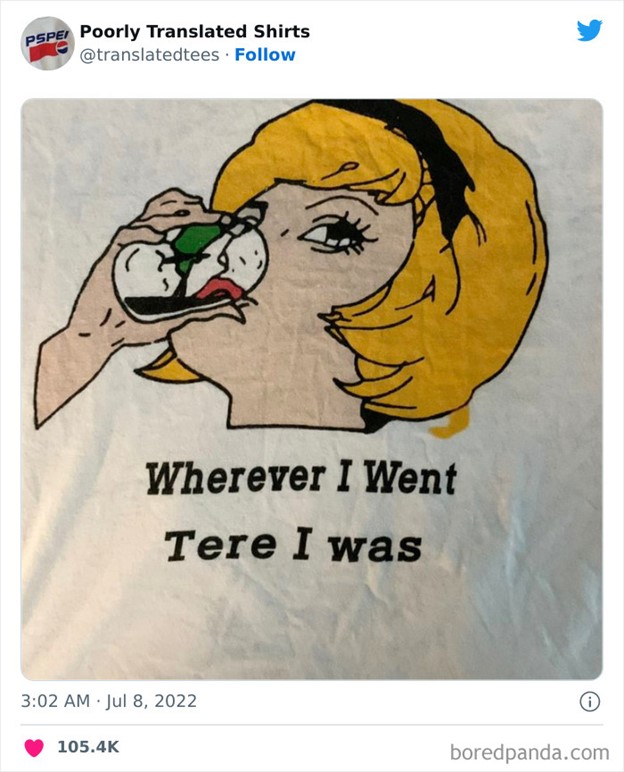