The Museum of the Portuguese Language

A large reason this building was chosen was because there are so many immigrants from Europe and Asia who arrive at this station and do not speak Portuguese. They come in through the Port of Santos into So Paulo and are able to immediately become familiar with the language through the help of the museum. It is also very helpful for Portuguese immigrants who are unfamiliar with Brazilian Portuguese. So Paulo Secretary of Culture brought about the idea for this language museum in conjunction with the Roberto Marinho Foundation. This museum cost roughly 37 million reais (23 million US dollars) to create.

The goal of the museum is to generate an active portrayal of the Portuguese language. It is the intention to educate and provide interest to visitors by showing unique and little known elements of the language. The caretakers of the museum want the museum to offer the public access to new knowledge and reflection in a powerful and enjoyable way.

The museum touches on the relationship of the Portuguese with others, as well as the earliest forms of the language. The museum is aimed at the Portuguese-speaking population. These include numerous individuals from many different regions and social backgrounds that haven’t had the chance to receive a greater knowledge of the establishment, history, and development of the Portuguese language.

The museum has within it an auditorium that holds a nine-meter wide and nine-meter high screen. This screen plays a short film that was made by Antônio Risério and directed by Tadeu Jungle. The museum also includes an innovative and very rare Audio Visual system within the Grand Gallery. This system creates a computer image that is 106 meters in length. It does this by using 36 projectors. This is considered the longest multi-projector image in the world. Controlled by a server, special software splits the long image into 36 pieces, with overlapping between the images. 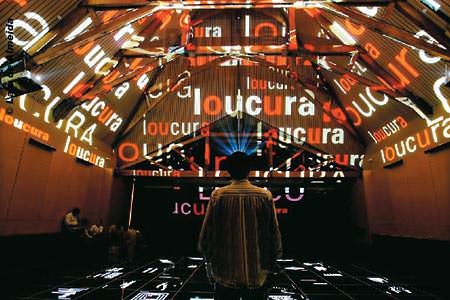 In the “word alley”, visitors can be entertained by moving around image parts of Portuguese words. In the “map of the speakers”, an interactive screen shows the different dialects within Brazil. Visitors are able to move through the map and listen to audio clips from speakers within a variety of states of the Federation. Within the plaza of the language, there is an amphitheatre-like structure called the “planetarium of words.” This includes numerous visual effects that are projected onto the ceiling and a lighted floor. The museum also has temporary exhibits and a large timeline of the Portuguese language.