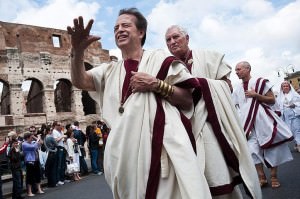 Proud ancient cultures that once spanned across vast regions, empires that took point in humanities march towards enlightenment - they have all long since perished or morphed into something lesser, but their influence still remains. Their language permeates through modern languages, particularly when dealing with scientific terms and abstract concepts, and their ideas and ideals are kept alive, even though we may be tone-deaf butchers of their once melodic accents.

Latin is still an incredibly valuable language to have in your linguistic tool box...

...be it for understanding medical and biological terms, for reading works of old authors in their original form or just getting a better understanding of our own language, as English borrows heavily from Latin and several languages have directly evolved from it - i.e. French, Spanish and Italian.

That being said, despite the fact that it is so well-preserved, Latin is a bit more difficult to master than living languages, simply due to the fact that its evolution was stopped dead in its tracks hundreds of years ago and that you can’t hear it spoken out loud, except in some classrooms. Even in classrooms, the methods used are often not conducive to quick learning. Students are not encouraged to engage their minds by contributing to interesting and informative conversations in Latin, using it in everyday scenarios and picking up on some of the subtleties intuitively on the fly.

Changes for the better, as more educators push for teaching “active Latin”

A lot of top educators have started pointing out the benefits of teaching Latin as you would teach any other language, e.g. getting the students to converse in Latin during class, sing songs, discuss mundane topics, delve into myth and ancient culture, etc. This approach provides much better results than just focusing on reading pre-selected passages out loud. D.C. Public Schools’ World Languages Program Coordinator, Claudia Bezaka has expressed a firm opinion that teaching Latin alongside modern languages can have a huge benefit, as it allows students to learn about the “why’s” behind some modern words and phrases and gives everyone an equal opportunity as they go into Latin as a tabula rasa.

Bezaka’s views are shared by many others who have long been aware of the benefits of teaching this classical language in schools, but lacked the motivation to jump right in and start doing something new. Now that respected educators are speaking up for the active Latin approach, people like Richard Trogisch, principal of the title I school “School Without Walls”, are implementing it on a larger scale and getting good results. The students include pre-kindergarten to eight grade children, 310 in total, and they are all being taught spoken Latin by two teachers that were hired specifically for this task.

Making Latin mandatory for students of all ages at his school
has improved their English language skills as well,...

sparked an interest in ancient culture and the program was especially well-received among the youngest students, Trogisch was happy to report.  This type of program has gained footing with several schools in Baltimore and New York as of late, and there is a good indication that the trend will pick up speed and spread even further.

More and more teachers are taking up Latin classes

Dickinson College in Carlisle, Pennsylvania, has started a week long Latin camp accommodating 35 people that many teachers, mostly from Virginia and Washington so far, are attending. Everyone speaks only Latin for the entire duration of the camp and gets top level instructions. A much larger camp in Lexington, Kentucky, was booked solid the whole year, and the Claymont Mansion in West Virginia, which hosts a similar week long camp, has been bringing in plenty of eager Latin learners as well. There are people of all ages and walks of life in these camps and plenty of fun and useful activities to do while you practice the language. From singing songs and playing with dogs, to beekeeping and gardening, they all live a simple rural life, which makes it easier to speak Latin all the time without hitting a wall in the form of modern technology and contemporary life for which there simply aren’t any Latin phrases.

University of Kentucky professor, Terence Tunberg, who leads the Latin camps in Carlisle and Lexington, is a true inspiration and a world class authority on the language – in his own words, he finds speaking Latin to be as easy as, or often even easier than speaking English. Such passion and knowledge on the part of the teachers has caused a huge spike of interest among the students, who are getting more and more involved with the language. It is an excellent way to learn more about western civilization in general and gain higher mastery of the English language, which gives Latin a clear practical purpose.

Whether or not teaching spoken Latin has real benefits

There are no long-term case studies available, so it is hard to tell if all these theories translate well into practical real world results, e.g. improved student performance in areas besides Latin itself. The head of Washington Latin Public Charter School’s classics department, Bill Clausen, for one, has remained skeptical on whether or not spoken Latin is necessary for the purpose of helping students improve upon their English and delve deeper into the classic authors, compared to the old grammatical method.

He contends that there is no real opportunity to use these extensive Latin skills aside from “signing up to be the pope’s Latinist”. However, the naysayers are few and far between, and these programs have gained a lot of popularity, both among teachers and students.

Quite some effort has been put into “reviving” the Latin language or at least getting students to speak it freely, as a mean to learn much faster and immerse themselves in the classical culture much more readily.

Despite some reputable authorities not being entirely convince that it is necessary, spoken Latin can now be heard in the hallways of numerous American schools, as both young students and their more experienced teachers excitedly cite old philosophers, translate songs into Latin and discuss the ancient roots of commonly used English words.