sales@thetranslationcompany.com800-725-6498
Home > Language News > 5 of the Most Commonly Translated Words

5 of the Most Commonly Translated Words 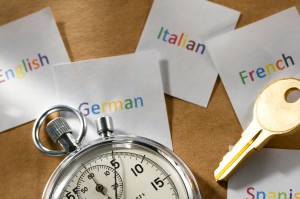 As boring as it might sound, “the” actually takes first place for the most commonly translated word. While it might seem like a piece of cake, translating this word actually isn’t so easy. “The” is a definite article, which is used to specify the type of reference being made to a noun. In English there is only one version of this definite article. In many other languages, however, there are various versions. For example, many romance languages have both feminine and masculine versions of “the” (such as “el” or “la” in Spanish and “le” and “la” in French), depending on the article to which it refers. There are also different versions depending on the numerical quantity of the noun in question. So while in English you would use “the” to refer to both the table (singular) and the tables (plural), in Spanish you would need to change the form of “the” being used. La mesa would denote a single table, while las mesas would denote plural. When there are four different way to translate “the,” things can get a bit confusing.

“To be, or not to be, that is the question,” Shakespeare famously wrote in “Hamlet.” In a plethora of other languages, however, it isn’t as simple as “being” or not “being,” but rather which be to be. In Spanish and French, for example, there are two different kinds of “to be,” one of which refers to a permanent state (nationality, physical characteristics, personality, profession, etc.) and one of which refers to more ambiguous temporary states, such as location, emotional states, and physical conditions. In English, this doesn’t exist, meaning it is incredibly important to have a translator who understands the nuances of the target language.

Yet again, nothing is a simple as it seems when it comes to translation. “To” has at least a dozen translations in German, as well as in the romance languages. In Italian, for example, “to” can be translated to (no pun intended) “a,” “verso,” “di,” “in,” “con,” and “fino a.”

This pronoun might seem pretty basic in English, but it actually generates all sorts of translation problems. Again, we run into the same problems of gender and numerical quantity. There is only one “it” in English, but in many of the romance languages, there are multiple, depending on the gender of the article and the quantity, as well as the positioning of the pronoun in the sentence. In French, “it” can be translated as “il,” “elle,” “le,” “l’,” “la,” and “lui.”