Origin of the Spanish Language

Interestingly, despite its historical origins in Europe, the Spanish language is heavily concentrated in American countries. 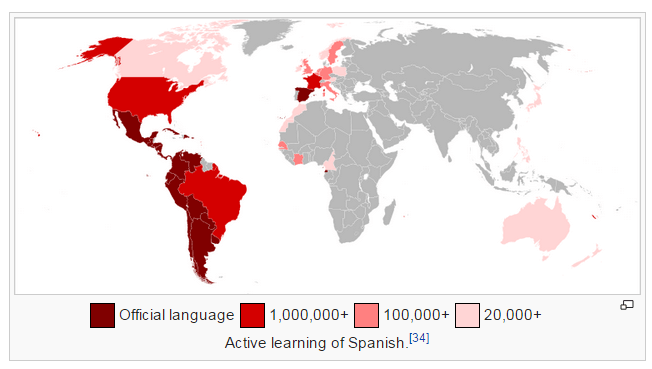 In the scope of the history of the Spanish language, pre-16th Century Spanish is referred to as Cat, referencing Castilian and 16th – 17th century Spanish is often called Classical Spanish.  The 16th and 17th centuries gave rise to what is now known as classical Spanish Literature, so the language as it was used at that time is called classic Spanish.  Modern Spanish is used to refer to the language as it came to be used in the 18th Century.

Spanish was first in the 9th century CE.  The first recorded written Spanish appeared in the late 10th century.  A few words added to older manuscripts that were written in Latin are generally accepted as the first documented occurrence of written Spanish.  Written Spanish first started to become standardized in the 13th century by King Alfonso X of Castile.  In the 15th century, the first Spanish grammar book was released.  Over time the language was codified and has become what is considered modern Spanish.

Modern Spanish is derived from spoken Latin. The particular area from which it was developed is the Iberian Peninsula, what is now Northern Spain. Spanish has developed and expanded over the years.  It is now the official language in 21 countries and one of the six official languages of the United Nations.  Spanish is also called Castilian.

One of the things that makes Spanish distinct from other Romance languages is the use of the accent mark.  Accent marks started to be used in the 15th century and became very popular through the 17th century.  In the 18th century, accent mark use became standardized and accents are now a unique part of the Spanish Language.

In order to make proper guidelines and regulate the Spanish language, the Royal Spanish Academy was formed in the beginning years of the eighteenth century. It was named the Real Academia Espanola in Spanish.

This Spanish language academy was established on the same lines of other European language academies like French and Italian languages. King Phillip V, with the help of the nobles like Duke of Escalona, Marquis of Villena and Juan Pacheco, took the initiative of forming this academy. The basic aim of the Royal Spanish Academy was refinement of the Spanish language improving its vocabulary and evolving a Standard Spanish dialect.

Efforts to Refine the Language

The continuous efforts to refine the Spanish language has resulted in the elimination of monosyllabic accented vowels and simplified the form of consonants to simple letters, making the writing form of Spanish language easier than the earlier form. In modern times, there has been a constant conflict of opinion over the exact Standard Spanish dialect, which is mainly between Europe and the American countries.

For these reasons, many media companies prefer to use the dialects suitable to specific target market. As a result of these diverse opinions over the exact Standard form of Spanish language, we can find variable Standard Spanish dialect in the following countries:

First, there is the need to refer to concepts that are unique to the Spanish or Hispanic tradition

Second, the military and political power that Spain enjoyed in the 16th and 17th centuries facilitated the spread of Spanish words

This interaction had a great influence on the language of the people of those areas, particularly cowboys and gold-diggers. The latter were standard figures in the Hollywood repertoire, and through them innumerable Hispanic terms entered the speech of the American people in general

Fourth, those lands in the south, which had formerly belonged to Mexico, were absorbed by the United States

Finally, the language of the successive waves of Spanish immigrants from Mexico, Cuba and the Caribbean islands continue to infiltrate English.

It is also important to note that while some of the Hispanic term have entered English directly through Spanish, some of them have been indirectly borrowed from other languages like Arabic and the languages of the Native Americans in Latin America via Spanish. However, the occurrence of Hispanicisms in English is much more infrequent than that of Anglicisms in Spanish.

There exists a second point of distinction. Anglicisms in Spanish are most noticeable in the fields of industry, technology and culture whereas Hispanic terms in English are most noticeable in the fields of food, traditions and folklore, in references to the sun and the summer, and to psychological traits. This has happened perhaps because these aspects of Hispanic society strike the foreigner as most alien and most unusual.

Many of them being popular Spanish loans of cowboy words. Some Hispanic terms in English have a remarkable history, for example, the word ‘guerrilla´ which was first used by Napoleon to describe the Spanish method of warfare during the Peninsular War, or the term ‘fifth column´ whose Spanish equivalent, the ‘quinta columna´ was first used by a general during the Spanish Civil War to refer to his hidden supporters in Madrid. And countless place names in the United States from Florida to California flaunt the Hispanic legacy. We will conclude by naming two of the most famous, namely, San Francisco and Los Angeles.